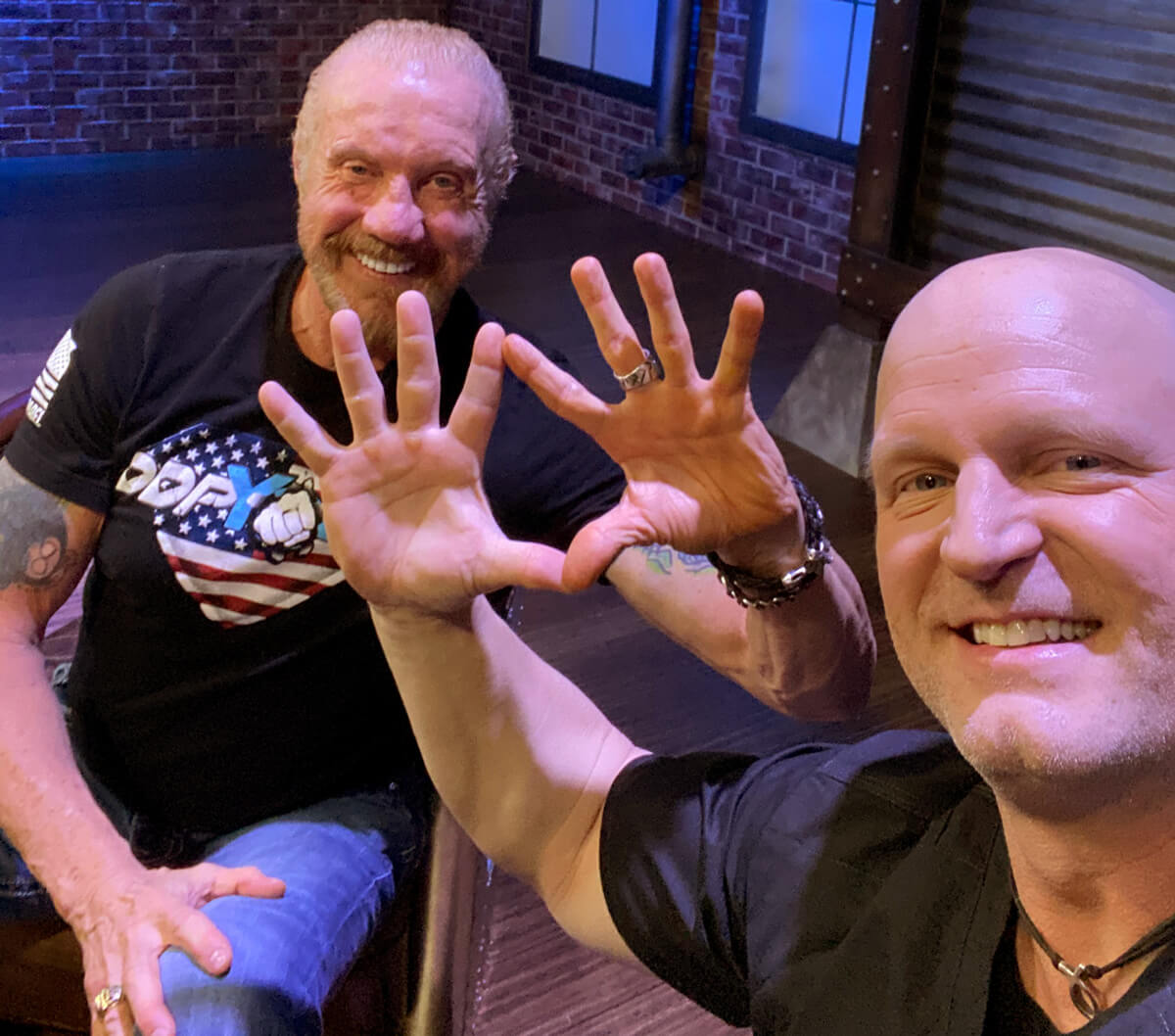 For over fifteen years on his daily syndicated radio and television shows seen nationwide by over 300 million weekly in over 450 markets, America’s Health Coach, Dr. Asa Andrew, has built a health media empire on the message of eat healthy, exercise, say your prayers, take your vitamins, and preaching how 50 is the new 30.

Now Dr. Asa is setting out to prove it.

The 3-Time World Heavyweight Champion is helping the nations top 3-Time Physician become a world champion in his own right, of longevity, by way of fulfilling a spot in the Professional Wrestling arena.

In 2006, Dr. Asa Andrew met with a friend of his about starting a new talk radio show that could help others live a healthier life, live stronger longer, and become the best version of themselves. That friend was none other than the 2nd largest syndicated radio host in the country, Radio Hall of Famer and icon, Dave Ramsey.

With the help of Dave Ramsey and his team, Dr. Asa launched a weekend health talk radio show for about a year, until then Clear Channel, now iHeart Media, offered a deal to move his show into the major leagues into a daily 3 hour slot lining up to the giants like the late Rush Limbaugh, Sean Hannity, Glenn Beck, and of course, Dave Ramsey.

For the last decade, The Dr. Asa Show has been the #1 Ranked health talk radio show in the country with the second largest health media audience next to Dr. Oz. Dr. Asa Andrew expanded into television in 2014 with the launch of his daily syndicated television talk show. Now with a newly added highly rated podcast to boot, and his newly launched all-health television network, the sky’s the limit to help others reach their potential. Dr. Asa is now ranked in the Top 40 of all talk show hosts nationally by Talkers.

However, after turning 50 this year, Dr. Asa was doing some self-reflection. Sitting at one of his close friends home, Professional Wrestling Legend, 3-Time World Heavyweight Champion, and WWE Hall of Famer, Diamond Dallas Page, Dr. Asa was asked by Dallas’s now wife, Payge, if he had any regrets in his life. She said, you’ve accomplished a lot, a great family, 3 doctorates, a medical doctor (MD), and naturopathic physician (ND), a chiropractic physician (DC), board certified in nutrition, former Strength and Conditioning coach for the 1993 Florida State Seminole football team under Head Coach Bobby Bowden when they won the first National Championship with Heisman Trophy winner Charlie Ward, run a successful media company, multiple clinics, a nutrition company, an live events company.

Dr. Asa contemplated and said, “Actually I do. I started in professional wrestling years ago, and due to several life events, I wasn’t able to finish.” I finish everything that I start.” It’s also great to note that Dr. Asa Andrew also performed the Diamond Dallas Page and Payge McMahons wedding in 2021.

In early 2000, Dr. Asa was invited to an open tryout at the original WCW Power Plant in Atlanta, Georgia. There he was one of two that made it out of 35 that showed up and was offered a contract. Paul Orndorff and Jody Hamilton ran the facility and told him to go finish his doctorate, then he would start so he could focus. Dr. Asa had nine months left to complete his degree, and during that time Vince McMahon bought WCW, and the opportunity was gone.

So Dr. Asa called his good friends, The Russian Nightmare Nikita Koloff , and WWE Hall of Famer, The Million Dollar Man, Ted DiBiase and told them the story. Ted then called his close friend throughout the years, The American Dream Dusty Rhodes. Dusty had just started a new company in Atlanta, Georgia at the time called Turnbuckle Championship Wrestling (TCW). He took in Dr. Asa and continued training him and running his shows along with WCW Superstar Glacier, Ray Lloyd, WWE Superstar Goldust Dustin Rhodes, and of course the current American Nightmare Cody Rhodes.

Dusty called Jeff and said Asa was ready. Jeff immediately took in Dr. Asa and he started work in the TNA office and waited for his time. As the company quickly grew and expanded, Jeff came to a point where he wanted Dr. Asa to be part of a new tag team called Red Shirt Security. Dr. Asa did a brief storyline against The World’s Most Dangerous Man, Ken Shamrock.

Then a tragedy struck for Dr. Asa. He was given the news that his father was diagnosed with terminal lung cancer. Dr. Asa was adopted from an orphanage by his mother and father at an early age and was very close to them. His parents had been married for forty-eight years. This was a major blow.

Now he had a pivotal choice to make in life. A crossroad if you will.

Do you take the opportunity and step into the spotlight, or do you step away to bring light back to the man who chose to call you son, loved you with all of his heart, and gave you a great life?

Dr. Asa went to his friend Jeff Jarrett and asked him what he should do? Jeff spoke as his friend, and the family man that he is, and said without a doubt, go take care of your Dad. Jeff knew the pain as he lost his first wife Jill to breast cancer.

So there was opportunity number two gone…

During the time Dr. Asa was helping his mother care for his father he spoke at a conference in Dallas, Texas were he was asked to speak on health. In the green room he met one of the other main speakers who was talking about money, none other than Dave Ramsey.

One day, Dr. Asa was driving running some errands for his mother and he needed a break from all the pain of watching his father slowly die. As he was running errands, he drove by Dave Ramsey’s office. He stopped in to say hello. Dave showed him around, and as Dr. Asa was leaving he said, “Dave what about a health talk radio show that really helps people?” Dave liked the idea, had his team make some calls, and helped Dr. Asa prepare for his break.

Then shortly after that meeting, Dr. Asa’s Dad passed away. Asa then received a phone call from the local Cumulus radio station. They were launching The Dr. Asa Show on Memorial Day Weekend that year.

The show took off like a rocket ship. In less than three months the show had the highest TSL (time spent listening) in the entire country, beating out the LA Morning show. In the radio world, this was unheard of.

iHeart Media called and wanted his show to go from a weekend show to be in the big leagues as a weekday 3-hour syndicated show lining up next to the late Rush Limbaugh, Sean Hannity, Glenn Beck, and icon Dave Ramsey.

Next came Dr. Asa’s first book Empowering Your Health (Thomas Nelson), which Dave Ramsey wrote the forward, and it was a #1 International Bestseller. Then in 2014 came the daily Television show. In 2018, Dr. Asa started producing health –related reality television shows for the Discovery Channel and is continuing his media growth, influence, and voice today in launching his own all health network on all streaming platforms such as Roku, Amazon Fire TV, Apple TV, and more called BELIEVE: The Dr. Asa Health Network designed to help reach your potential and become the best version of yourself.

Back to Dallas and Dr. Asa and the question of having any regrets….

There they were, two of the top self-help health guru’s in the county, staring at each other. Dallas Page’s massive backstory is that he is the oldest to successfully start a career in professional wrestling. Now he was looking at his friend, Dr. Asa, age 50, and asked him the hard question, “So what are you going to do about it Bro?”

The famous quote is, “Never say never.” Life has definitely circled back for Dr. Asa.

The latest to ever start in this game, Diamond Dallas Page, is now Dr. Asa’s friend and encourager to go after this at 50. What the American Dream Dusty Rhodes started, The American Nightmare Cody Rhodes will potentially be able to continue.

And the head trainer from before, at Dusty Rhodes former TCW, Glacier Ray Lloyd, is having a hand in training Dr. Asa again at the Nightmare Factory alongside one the best coaches in today’s professional wrestling business, QT Marshall.

Dallas and Dr. Asa are filming a new documentary on helping others transform their health that will be released sometime in the upcoming year.